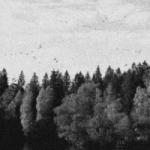 Before the great summer break nearly all record labels are focused – as usual – far more on pure quantity than quality and just in the moment when I’m starting to wonder (not for the first time in the last couple of years!) when one of the four riders of the Apocalypse will finally knock on our doors to advise the death of the so called true underground the latest OCTOBER FALLS release has arrived in my dark cave. The Finnish band has started their musical journey in 2001 as a pure ambient act but over the years they opened their horizon to a mere melange of epic landscapes and Black Metal. So normally the next step would be to point out parallels to the one and only nature bound band ULVER but the presented three tracks – two of them nearly reach the unholy 20 minutes barrier – have far more in common with a slightly different Norwegian scene veteran. OCTOBER FALLS don’t need this kind of name dropping but "A Collapse Of Faith" is worth to be connected to the first BORKNAGAR releases because the essence is similar even if both bands are separated by 10 years of existence – including MOLESTED as the pre-BORKNAGAR band. But despite these parallels is the third OCTOBER FALLS release nevertheless a unique output. Especially the two major tracks are in the position to play with different musical motives and moods – supported by superb guitar parts – that every further play of this release is offering another level. Releases like "A Collapse Of Faith" unfortunately are an exception to the rule these days so don’t dare to ignore this great release. www.debemur-morti.com, koti.welho.com/mlehto4/