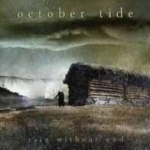 There had been a wonderful time when the Swedish Metal scene was not completely dominated by the new way of Swedish Death Metal (IN FLAMES, SOILWORK) and bands like KATATONIA, OPHTHALAMIA (with additional Black Metal influences) and also OCTOBER TIDE could show the Metal world that melancholy wasn’t completely restricted to the rainy Britannia. So the re-release of the first OCTOBER TIDE album is like a call out of the tomb and I have to confess that more than one smile has touched my face during listening to this release. The album had made a long journey before somebody realized the quality of the side project of two KATATONIA members (Fredrik Norrman, Jonas Renske) and Vic records finally released "Rain Without End" in 1997, two years after the recording session at Unisound, Sweden. The first release had been strictly limited (and in these days a limited edition was worth to be called such) to 1000 copies but honestly speaking the cover was really poor and the new edition is offering next to a re-mastered sound by Mr. Dan Swanö a much more suitable cover artwork. The seven songs are musically deeply routed in the KATATONIA "Dance Of The December Souls" world which is no surprise taking into account that their guitar duo has searched for a further place of action. The major musical trademarks are, next to the great Death vocals, the really passionate use of the guitars (on the normal and the acoustic front). The atmosphere is still – even after the remastering – so extremely convincing that after listening to the first song (’12 Days Of Rain’) everybody will realize the time of the recording. I really tried to avoid "the good old times" term but the Swedish scene had changed drastically within the last 10-15 years that such an album seems not possible these days. But OCTOBER TIDE unfortunately survived only a handful of Swedish winters. After the release of their debut they switched to Avantgarde and recorded "Grey Dawn" (their second album) but shortly after the release the band split up to concentrate on their major musical projects (BLOODBATH; KATATONIA). "Rain Without End" is maybe not the best melodic Death Metal album of all times but nevertheless a piece of Swedish Metal history and without a doubt a great release with some extra points from my side for the good old Swedish Metal times. www.vicrecords.com