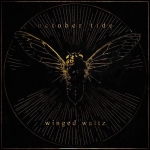 I’ve always been sincere in what I like, even if lots of people are not interested in the same stuff I dig. I can honestly say I have a big love for KATATONIA, from their early melodic Doom / Death material, all the way to their mellow progressive Art-Rock transformation. It’s not a big secret that OCTOBER TIDE was born when Fredrik Norrman joined forces with Jonas Renske while both were playing together in KATATONIA in 1994. After putting out 2 magnificent records, Jonas Renske left OCTOBER TIDE to focus on KATATONIA, then lots of things happened and the band recruited different members to move on. In 2010 the Norrman brothers left KATATONIA to focus all their attention back on OCTOBER TIDE and they came up with an amazing pair of albums named "A Thin Shell" and the magnificent "A Tunnel Of No Light" (that were released in 2010 and 2013), with the latter the band created a heavy and mellow record like never before, and after all earned a high acclaim in the media everywhere. OCTOBER TIDE went on to write their newest album that will surely turn the head of many die hard KATATONIA and DAYLIGHT DIES fans. "Winged Waltz" is the natural evolution by the band but also it’s a very challenging record that gathers all the good things the band ever made and blend them into one unique record. I think the comparison will be obvious but "Winged Waltz" have ingredients coming from early and late KATATONIA, early and late OCTOBER TIDE and the melodic aggression that will remind you of bands such as IN MOURNING. The vocal performance by Alexander Högbom is top notch this time around, way more focused and vicious than on the previous record, way more heavy and emotional to say the least. The music is even heavier than before in some critical parts of the record while maintaining the melodic approach the band is known for, and the slow sections are as memorable as ever but with a sense of depression added to it. The drumming performed by the newest member of the band, Jocke Wallgren, is something remarkable, tight and full of precision with some groove and loose sections that bring a fresh air into the band’s trademark sound. The length of the record is close to "A Tunnel Of No Light" so it will be kind of easy to feel like home if you have payed attention to that opus. This is without a doubt the best album I’ve heard so far in 2016, and I hope this album will help OCTOBER TIDE to go up in the game as they totally deserve it. This newest record is the first with Agonia Records, so you can go grab it and / or listen to it at www.octobertide.net, www.facebook.com/pages/october-tide/6123636025, www.agoniarecords.com