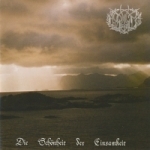 With relief I found out about ODIUM IMMORTALIS cause these Germans don’t give a damn about Black Metal clichés. I mean, nothing wrong with clichés as long as you’re either true to them (are they still clichés, then?) or you’re aware of your image and don’t take it too serious. ODIUM IMMORTALIS are into philosophy and animal rights instead. “Die Schönheit der Einsamkeit” (s. th. like “The Beauty Of Loneliness”) is an ambitious album with rather epic songs leaving room for both (lots of) rage and calm acoustic moments. Melodic almost without any keyboards. Nothing too innovative, either, but absolutely solid as the songs develop depth by effective use of dynamics. Good production as well. Actually, there is only one major point of criticism: the clean vocals, or rather the spoken passages. Hey, why can’t poetry come to life one day? Where’s the point in a robot reciting something? On the other hand, there would be some sense behind if this actually was supposed to be a robot but it sounds more like me back in school. But as this is a rather occasional element, I can still recommend this one to Black Metal fans and to those who don’t have the time for reading a whole book (of poetry). But in case the band is planning to use this element again next time: please practice intonation, get some unemployed actor, dig up Klaus Kinski or whatever! www.odium-immortalis.de, www.immensestorms.de