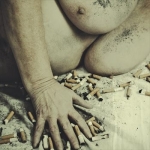 What we have here is another act from Poland. Seems to me as if our neighbours in the east have an extremely active scene right now – there’s no other explanation for the great amount of albums from Poland in the past few months. And as long as there is one or another nice record among them, it’s pretty fine with me. And “Esperalem Tkane” is one of those records. From the town of Kraków, ODRAZA came to show the world their vision of blackness and Metal. Both members of this duo are also involved in the band MASSEMORD, as well as drummer Priest plays in VOIDHANGER and guitarist, bassist and singer Stawrogin is active in CRAWLING DEATH. So we have two experienced musicians responsible for the ODRAZA debut album “Esperalem Tkany”. And this raised some expectations beforehand. To my surprise, these expectations aren’t disappointed by ODRAZA (Polish for disgust or loathing), but even surpassed. The opening riffs of the first song ‘Niech Sie Dzieje’ already reminds me of newer SATYRICON, a resemblance that’s like a common thread of the whole album. But of course ODRAZA are not copycats, since there is more than SATYRICON here. ‘Wielki Mizogin’ is a furious piece of rage, whereas the title track surprises with moments that even remind of classic Rock, paving the way for a part that SATYRICON would be proud of. This ten minute long musical rollercoaster ride through the abysses of human life is the linchpin of the whole album, but songs like ‘Gorycz’ or ‘Próg’ with its great 1970s inspired guitar harmonies, acoustic guitars and the even bluesy break are very great tunes as well. The latter draws the line to the final monster ‘Tam, Gdzie Nas Nie Spotkamy’, a blackened version of Prog Metal near to stuff like WITHERSCAPE or sometimes even 1970s Prog Rock. ODRAZA definitely don’t play music that I would call light fare. But if you give “Esperalem Tkane” a little more time, this album will unfold and proves that it was worth the time spent with it. Check the label, since there’s no bandsite right now: www.arachnophobia.pl