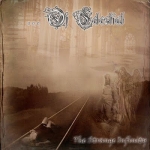 Eastern European countries have been producing many promising yet even great sounding Metal acts over the years, and finding all of these true, most potential gems out of them, is like trying to find a needle from the haystack really. With enough hard work, some good findings can be made. OF CELESTIAL, this symphonic sounding Ukrainian extreme Metal act, knows how to please the extreme Metal community. On "The Strange Infinity", which also happens to be the band’s debut studio album, released on Russian extreme label More Hate Productions in 2009, OF CELESTIAL show its true claws for being talented composers of an atmospheric, extreme Metal that has a strong twist of Black Metal but also some flavors of Thrash and Death Metal – and not to forget Symphonic Metal completely either. Overall the stuff what they do, flows well and effortlessly for them, having a good amount of variation squeezed into the songs, in a way reminding me of SAMAEL and even slightly SENTENCED’s "North From Here" era when it comes to the guitars’ sound on this particular release. Vitaliy on vocals and guitar is – at least in my opinion, the most important link of OF CELESTIAL’s sound with his tasty, dark-ish vocal patterns and mercilessly heavy, catchy guitar riffs and stuff. Without dragging down any other musicians in the OF CELESTIAL line-up too much either, unfortunately Ivan’s keyboard parts seem to be everywhere, at times even over-running space from all other instruments that it kind of becomes a bit irritating to listen to the record after a while. With a less keyboard-stressed effort, "The Strange Infinity" would have stood out way better as an album, I think. But this being just their debut, some things can be forgiven, and eventually forget. What partly made me to say this, OF CELESTIAL have already released their 2nd album titled "Virgin Blood" in 2011, which has probably gone through a positive facelift operation as far as the songs on it are concerned. OF CELESTIAL: www.facebook.com/ofcelestial, label: www.morehate.com