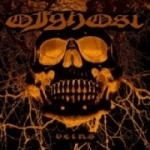 Sami, the mastermind behind the Finnish noizemakers OF GHOST (formerly FILE OF GHOSTS). OF GHOST is a one-man project act that he has been running alone for the last 3 years by releasing a couple of demos, plus one full-length record ("Grey Metal") under the FILE OF GHOSTS moniker. Since Sami’s previous outing, which was the aforementioned "Grey Metal" record that he released by himself as a lo-fi / low budget product in 2011, on "Veins" Sami has gone even further by widening his project’s musical spectrum by adding some clean vocals and a few other not-that-insignificant elements into his extreme and disturbing sounding Metal approach that have all been roasted together with Sami’s maniac-like drive for musical things on this a little bit more twisted and perverse side of the world but in a good way though. Those of you who haven’t ever listened to a song off of his insane project FILE OF GHOSTS (or OF GHOST) before, I think a close enough musical description about his project could simply be grinding Black / Death Metal with some experimental and psychedelic elements thrown in, just for the sake of making things a bit more spicy yet juicy for the listeners. The same description also applies for the 8 songs that are offered on "Veins" – and I am delighted to say that with each new release Sami has put out, his understanding about how to compose a solid, extreme sounding Metal song, has also increased drastically – the more he has sacrificed his time for thinking over carefully which direction he wants to develop his ambitious project to. On "Veins", all his spent hours have securely paid off for him; OF GHOST sounds more like a full band than ever before. I have complained earlier about the use of a drum machine on his previous works, and I still think he should hire a real skin basher to get rid off that way too clinical and cold drum machine sound some day for good. Despite my minor yet I believe, somewhat unnecessary complaint, "Veins" is worth checking out for the fans of extreme Metal. www.myspace.com/ofghost