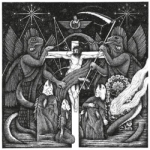 According to Wikipedia, "the OGDRU JAHAD – creatures appearing in the Hellboy series – are serpentine / crustacean entities which once resided on, and presided over, Earth. They are pitiless, chaotic, bent on destruction and subjugation and often so horrific in appearance that the mere sight of one of them sometimes induced madness." What a perfect band name for this Danish commando featuring members of SADOMATOR, BLODFEST and LIGFAERD which provides perfect fodder for all you bestial Black / Death maniacs out there! Whereas the vocals sound like a cross-bred of Mr. Helmkamp (ex – ANGELCORPSE, ex – ORDER FROM CHAOS, ex – KERASPHORUS) and Paul Ledney (PROFANATICA), musically you can expect the usual BLASPHEMY, BLACK WITCHERY, CONQUEROR, PROFANATICA worship which despite a muffled, analogue and pretty purist sound does not end up in utter, unbearable chaos but due to some groovy sections (think the classic ‘Ritual’ breakdown) and almost melodic (!!!) leads in a raw Trey Azagthoth-ian style result in a highly enjoyable concise and intense album. I definitely can not resist the violent bashing of the cymbals, macabre vocals, blasting fury and neck-crushing slower sections OGDRU JAHAD unleash upon my auditory canals and song titles like ‘Hobo Of Nazareth’, ‘Necromantic Rites’ or ‘Sacred Sodomy’ fit just splendidly to these terrifically terrorizing sounds. Surely the quartet did not come up with an innovative assault or such an unrivalled masterpiece as "Desecration Of The Holy Kingdom", but still it pleases me e.g. way more than any PROCLAMATION album ever did – guess, that’s blasphemy for some, but well who gives a rat’s ass. Check out a tune here. Order it at www.ironbonehead.de