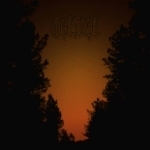 Important question: does the world need a Black Metal side project of HOUR OF 13 Mastermind Chad Davis? Well, I can’t speak for the whole world, but I’m pretty sure I don’t really need it yet. OLDE started in this very year 2013, when Chad Davis joined forces with Stíofán De Roiste, a.k.a Steven Roche, vocalist of the Irish Folk Black Metal band CELTACHOR (never heard of them before) to compose and record a Black Metal album. They baptized the band OLDE, called the album "The Gates Of Dawn" and released it on Dutch Soulseller Records. Sounds pretty boring for a story, and yet this story pretty much fits to the album. "The Gates Of Dawn" starts of pretty well with the epic title track, that comes with BATHORY vibes and some speed parts that are even fitting to the song. But with ‘Under The Banner Of The Wolf’, Davis forces the pace and thus sacrifices the feeling. The following ‘A Memory Of Ages Past’ draws the old school card, but in an inconsequential way, the vocals are not aggressive enough, and only the melodic part in the end pleases. ‘Silver Hooks And Blood’ and ‘Our Once Forgotten Empyrium’ are too uninspired to get more than a mere mentioning. Then all of a sudden, the production changes with ‘A Desolate Throne In The West’ to a very raw and "homemade" style for the second half of the album, giving the song a more true Black feeling, yet with not much success in concern of the originality. The down tempo stomper ‘Culling Sheep’ appears to be a little highlight again. But the production does not do ‘The Death Throes Of Empire’ a favor, and it completely destroys the atmosphere of the following epic ’13 Winters’, a song which might have been a real highlight with an appropriate sound. But I can’t really enjoy it that way. The final keyboard instrumental ‘The Heart Of Ancient Times’ only serves as a (too) long outro and leaves me somehow grunting on the quality of the album. Nice ideas meet weak moments, and the two different recording sessions with contradistinguishing sounds don’t make "The Gates Of Dawn" much better or even more interesting. The thing with OLDE is the same as with HOUR OF 13 – they’re OK and have some nice moments, but in the end you wouldn’t be unhappy without them. Anyway, Black Metal junkies might check out OLDE at: www.facebook.com/oldendarkness or the label at www.soulsellerrecords.com