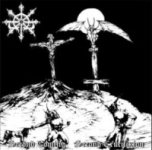 Do you know that feeling when you see a band photo where guys are sporting KREATOR shirts and once you put on the record it sounds like DEVOURMENT OF THE DISGORGED FETUS? Yup, pure disappointment and irritation. Thanks Satan, in the case of the Greek trio OMEGA this is not an issue: three long haired dudes wearing CELTIC FROST, DARKTHRONE, AURA NOIR t-shirts and sounding exactly like a mixture of these three cult acts. Add to that a Jackie bottle of VENOM primitivism and lyrics about ‘Black Metal Rust’ (the hit on this record), ‘Evil Rock ‘n’ Roll’ (the second hit on this platter) and the weekend-warrior anthem ‘Big Beer For Big Nuts’ (the chorus “Gimme a beer” is a line probably everybody can associate with… your bar man will love it when you yell that during ordering!) and you’ll know what’s the deal with the debut album of this group. OMEGA are about straight-forward, filthy entertainment, ideal for drunken nights with booze and blasphemy, rough sounding, hard rocking and unsophisticated to the max – during clumsily rhymed passages as “Show no mercy for the weak, Jesus mother can suck my dick, this is something you should never forget, worship Satan and hail Baphomet” it gets hilarious at times but what’s life worth without a good laugh? Nothing, right! Adar’s vocals still lack the übercoolness of Apollyon or Nocturno Culto, the riffs and drumming aren’t more than effective, but the drive and feeling are definitely in place, so check this out if you need a good soundtrack for getting tanked! www.myspace.com/666omega, www.undercover-records.de