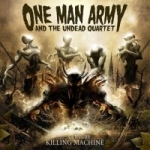 If Johan Lindstrand, THE CROWN’s “Satan from hell”, comes up with a new band, expectations are high. His work with the above-mentioned Über-orchestra is hailed as one of the most impressive within the Metal-scene of the last decade by many. So does this new effort live up to their achievements? I’m undecided. “21st Century…” is a different beast after all. Not really what one would call Death / Thrash, but more like a powerful, stomping groove-monster. You could even label it Adult-Orientated-Thrash, if only for the stupidity of it. These are not angry young man but mature, embittered bastards. Not the worst thing you could say, since each and every note of this has much more feeling and soul than every goddamn sterile hyper-blast-fest that labels like Unique Leader keep spitting out every single month. Don’t get me wrong, all this insane technical onslaughts surely have their charms and five years ago I would have gone mad about every one of them but it all seems more and more like a dead end to me. Which brings us back to the ONE MAN ARMY, whose simple, ass-kicking Metal, combined with the cooler-than-thou rock’n’roll attitude of Mr. Lindstrand makes for a far more memorable and enjoyable listening. The perfect soundtrack for beers’n’barbecues to come… www.onemanarmy.tv.