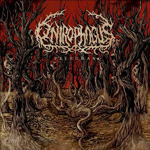 To be honest, I didn’t really look at the info about this release before pressing play, and was halfway through the album convinced about this was a re-release of yet an obscure Spanish band, that never gained the deserved attention, when the album was released during the mid-nineties, now resurrected by Dave Rotten and Xtreem Music. So I was quite astonished when I saw that this was a brand new recording by a band, which was formed as late as 2011, damn. The opening of the album’s first track ‘Baikal’ cheats a bit as it leads the thoughts towards METALLICA’s ‘Hit The Lights’, though that impression is soon shot down with the downtuned riffing, the bleak and doomy atmosphere and the pace together with the grim growl from the pits of hell. I am quite surprised about how well the songs and the album is crafted, one of the usual pits for a Death / Doom band is monotonous songs and that pit is ONIROPHAGUS tip toeing around without getting to near the edge. They start of quite gloomy and slow, speaking of pace now, delivering the music of utter dark and melancholic atmospheres, together with a tad of horror, just take a listen to ‘Discordia’ and enjoy the lovely references to AUTOPSY. Though track number four kills a bit of the momentum of the album for me, an intermezzo of 2:31 minutes of classical guitar, that really doesn’t lead onto a second part of the album, the prior track ‘Feverish’ connects much better with ‘Nocebo’ than the classical guitar, a bit of a shame for the full experience. But this is still the most thought through and well done Death / Doom Metal album I’ve heard in quite some years from a new band, this is a stellar release that takes us right back to the heydays of the glorious genre, that have died quite a bit. The Spaniards have the whole package, they hit the right bleak atmosphere from the start and keeps it on with a few good twists, pace wise we are getting the whole register as well, from dragging slow doominess to fastpaced doublebass drumming and a grinding snaredrum, when they are going berserk, all molded perfectly into the form ONIROPHAGUS has cast. "Prehman" is almost to good to be true for a debut album in these days, as one should think one had heard it all, at least once, though ONIROPHAGUS is handling the music and the genre, just as natural and equilibristic and excessive as Messi is handling the football! www.facebook.com/onirophagus, www.xtreemmusic.com