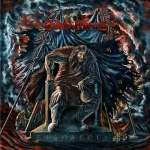 "Ragnaroll" is this Russian band’s first full length release, after an EP and a digital single release. The title does also cover their musical style I guess, a new niche for me, neo thrashy Rock’n’Roll mixed up with Folk Music and grunted semi thrashy vocals. I don’t think I ever have heard anything like this. The Heavy Metal / Rock’n’Roll part of the game is laid upon stop and go tactics, something that I’m not that fond of, I like a good flow with some interesting twists, and a good well timed break here and there. Here it feels like the duo is missing the ideas to make a whole 3-4 minutes tune with a flow, and then instead have divided the tracks into sections and glued them together with a bit of violin, the likes and untimely breaks. That said the violins utilized actually work quite well, and bring an interesting feel to the music, though the base and the vocals seems a bit uninspired, besides some of the choruses, which are quite catchy. Some more focus on the songwriting, as a better flow would do wonders, a human drummer instead of the quite sad sounding programmed drums would also help a bit, and perhaps some more power on the bass, as it actually delivers some nice things during the album, and fills quite a lot in the musical picture, though the sound is again a bit sad. And a tad better mix, as the instruments and vocals are a bit in and out of focus. With some work here and there, such a project like this, might turn out good, though right now there are quite some gaps, and that makes the listen uninteresting and quite a strange sensation. More info at: www.facebook.com/onkelh