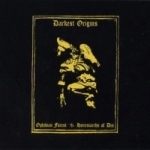 Multi-national Black Metal act OPHIDIAN FOREST (band members’ current locations being in Croatia, Netherlands and San Francisco, USA), and the other Black Metal horde HAERESIARCHS OF DIS from San Jose, California, have got their early demo material collected for this 15-track split CD, aptly titled "Darkest Origins". Those of you who are already aware of both of these 2 underground Black Metal bands, obviously cannot live without this split CD purchase for your carefully cherished Black Metal collections. Well, I can because I haven’t ever heard of these 2 UG-Black Metal bands before. Now having heard OPHIDIAN FOREST’s part for this split, I think I can continue my life like I wouldn’t have ever heard of them. I am sorry to say but there’s nothing in their demo stuff that I found particularly interesting. And I am not even saying this because I had a pretty bad day at work today – and now I would be sort of on my personal crusade to find some scapegoat as I would badly be revengeful against something. Nope, that’s not something why I ultimately sort of dissed this 3-piece Black Metal band OPHIDIAN FOREST. They simply didn’t have anything on offer for my personal liking. I am just being downright honest here – and that’s all, folks. As for this 1-man project, HAERESIARCHS OF DIS’ demo material goes, well, they at least sound a bit more interesting but that still doesn’t tell a thing. Even if both bands’ early stuff has been re-worked, re-mixed and re-mastered exclusively for this collection, my sincere opinion has nothing to do the final outcome of these two bettered recordings. Honestly neither of these two bands’ demo stuff sets my trousers on fire by sheer excitement, as I was originally hoping they even might. I would call the content on this disc only as a 2nd or 3rd rate Black Metal that may surely have some true kvlt following but it’s still dull and boring sounding. Now, after all’s been said, perhaps there’s someone out there now who’s planning a bloodthirsty revenge against me for my shameful words – who knows. I’d better hide myself into a deep bunker after most of the dust has fallen. www.ophidianforest.com, www.toadstoolcomics.com/dis, www.facebook.com/pages/UW-Records/162216050503802