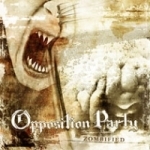 These guys are lurking around since 1986 and according to themselves they have been the first Punk band in Singapore. But of course their style nowadays can be more pictured as a gross mixture between Hardcore and brutal, riff based Thrash Metal, like PANTERA used to play on “Far Beyond Driven”. The music benefits from the immense power the musicians put into it, seems like they still boil with hate and anger, even after (or maybe because?) almost twenty years in the business. The vocals are the common Hardcore-vocals, which means more husk shouting or barking than singing. And the music? Well, I described it just a few lines above, and honestly I must admit that I do not like whole Hardcore genre, especially this kind of ( Thrash-) Metal Core like CALIBAN. The problem is that it is just based on pure energy and nothing else, so there is no real trademark like a certain melody or a specific rhythm that makes it possible to differ the songs. Each time I listen to or attend a gig by such bands it all sounds the same to me. And OPPOSITION PARTY? Well, at least they manage to decorate their songs with melodic guitar solos, which remind me of the classical Punk / Crust Core style DISCHARGE used to play. So all people who like Metal Core performed on a high-energetic level should take a listen to OPPOSITION PARTY. www.oppositionparty.tk