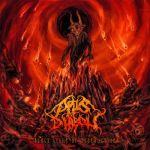 Although formed way back in 2005 in Uruguay, this is OPUS DIABOLI’s debut album. South American Black Metal bands will always be compared to the titans of their area, namely SARCOFAGO and early SEPULTURA from Brazil, and also some killer bands from nearby countries like Chile. But very few come out of Uruguay and even now I can just remember a handful of bands from there. OPUS DIABOLI plays a very 90s style of Black Metal, very much influenced by early BURZUM, MAYHEM and BATHORY with some really wicked high pitched vocals. Musically speaking the band is quite competent, also they do have a very good recording quality and even if the guitars are also a bit high pitched, they do sound good and thus more powerful than some recordings of the bands that influenced them. While there is plenty of speed in the songs, when the band plays in a slower tempo, they do tend to sound a bit like a depressive suicidal Black Metal band. I like the way they keep things simple and direct, it gives them a crude Death Metal aura and the early SLAYEResque sloppy solos also work fine. At over 45 minutes, I think it is a bit too long for the style of music, as some songs tend to sound alike, and the vocals get a bit annoying after a while. But those looking for quality Black Metal bands influenced by the 90s Norwegians need to look no further. www.facebook.com/opus-diaboli-206464656071514, www.satanath.com