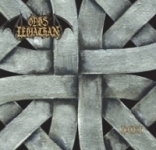 Out of the dark frost-ridden woods of Colombia came OPVS LEVIATHAN, preaching about heathendom and darkness. Honestly, if I didn’t know where this one-man-band comes from, I would have never supposed anything further than 50 miles away from the area of permafrost. But now we have a South American band sounding as Scandinavian as a Black Metal band might sound. And they do very well on their first full-length album in twenty(!) years, after a demo in 1995 (under their old name LEVIATAN) and a split-album with ASSUR in 2003. Even though OPVS LEVIATHAN can only be called Black Metal, they are far away from the simple, raw sounds of DARKTHRONE or similar bands. Bands like (very old) IN THE WOODS… or DISSECTION came to my mind, when I first listened to "I:O:I". The epic song structures made me think of "HEart Of The Ages", whilst the guitar play and the emphasis on melodies reminded me of older DISSECTION albums. Add a few ideas of Pagan Metal, especially in the calmer moments of the album, and a feeling for complex arrangements to the opus. Then you might have an idea how songs like ‘Alone In The Darkness’ (epic and complex) or ‘The Old Chant For The Dragon King’ (great intro with a heathen feeling) sound like. The recordings (done from 2003 to 2005) and the mix make a major contribution to the constant high level OPVS LEVIATHAN offer here. To me, "I:O:I" is one of the biggest surprises in extreme music I heard in the last months and I can only advise all Black Metal afficionados to give this album a chance. If you want to get one of this limited CDs, be quick, since there are only 666 (of course!) of them available. Check the band page: www.opvsleviathan.com, or order it directly from the label: www.mightyhordes.com