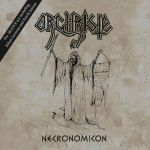 In the late 80s the undeground scene in Sweden was more than active end even more creative. On a daily base, bands were founded. Encouraged by schools and government to be creative, dozens of bands were formed and especially the Thrash scene of the 80s had massive impact on the Swedish youngsters. Two of these youngsters were Patrik Jensen and Johan Larsson. Influenced by bands like METALLICA, SLAYER, DARK ANGEL, DEATH and POSSESSED they started jamming around, playing gigs and writing their first tunes. They even supported CARCASS in Sweden back in the days. In September 1989 they recorded their first and only demo “Necronomicon”. The opener ‘Waiting For The Exorcist’ was pure Thrash, with a heavy METALLICA meets DEATH edge, but had already deep vocals that later turned into a more aggressive way. Even though it was their first demo, their songwriting was already pretty matured with fine structures and good and technical instrumentation. ‘The Blessing Of Death’ continues the way and again is another Thrash wrecking ball. Here the vocals of Johan are far more aggressive and very enjoyable. The guitars are shredding and are very precise, so they definitely worked their asses off to get these tracks together. Also the drumming is very technical and without knowing they were far ahead of their time. ‘Til Death Do Us Join’ has a more DEATH influenced vibe and shows some traces of the international tape trading scene and what influences they got from abroad. The last track of the demo ‘Open Grave’ offers some really excellent drum work again and rounds off this very cool and worth to check demo. Especially the remastering makes this demo very enjoyable now compared to the original poor quality available on YouTube. The provided bonus tracks are taken from the mentioned show in Norrköping, Sweden on 08-02-1990 when they were supporting CARCASS on their “Symphonies Of Sickness” tour. Very raw quality, but also showing their skills once again. Unfortunately the band disbanded shortly after this and together with former members of TOTAL DEATH, Jensen and Larsson went on to form SEANCE and the rest is history. Old school lunatics and tape collectors should try to get one of the strictly limited tape copies of this monument of time. For more info, check one of the following sources: https://orchriste.bandcamp.com, www.facebook.com/seanceswe, www.repulsiveecho.com