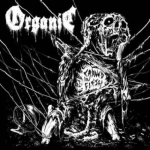 ORGANIC is an Italian Death Metal band formed back in 2013. Their debut album, "Carved In Flesh" has been released by the fine German label Testimony Records. And what an album it is! There is no denying on the fact that their music is greatly influenced by the NWOSDM and the "almighty" Boss HM-2 pedal. The razor sharp production instantly reminded me of DISMEMBER’s debut album. It’s dark, saturated, dense and heavy like a ton of bricks and it somewhat feels familiar without being a copy. But that is where the similarities stop. ORGANIC has crafted some fine Death Metal here with their own twist and turn. The intensity level is amazing, since the album never looses its grip on the listener. Most of the songs are mid to fast paced with some blast beat parts here and there, so the constant variation keep things interesting. And these 4 guys’ hard work shows effectively throughout 37 minutes of dementia. With the help of a really well balanced mix, which gives each element the place it deserves, the performances hit the spot right as they should and then some. Maxi Careri’s vocals are deep and gurgling, yet surprisingly understandable. Excellent bass work from Markus Walder which pairs nicely with Lukas Hofer’s precise drumming, both providing a really solid foundation for Benni Leiter’s impeccable riffing. It’s refreshing how the band manages to mix in some D-Beat, Punk and slow Doom-ish sections too amidst the humongous Death Metal wall. But what I liked the most was the groove ORGANIC plays with. Even though they are brutal and thick, they are also amazingly groovy and 100% headbanging material! I mean, when an album is this good, I usually let the music speak for itself. So, all I will say here is that any self-respected Death Metal fan must get this album asap! Contact the band here: www.facebook.com/organicdeathmetal. And get their album from their label here: www.facebook.com/testimonyrecords