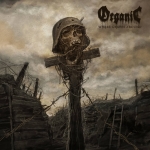 With just the first second from this album, you know why this band is named ORGANIC! Goddamn! This is some stellar Swedish HM2 inspired sound, I’ve heard a handful of Swedish sounds this year but ORGANIC hit it out of the park, the riffing is bloody relentless, it is just a constant attack without mercy or second thought. “Where Graves Abound” is the second full length of ORGANIC from Italy, released on Testimony Records, this album is sure to strike a chord with a lot of fans. No, there is nothing new here or earth shattering. However, what is earth shattering is the bloody delivery and the overall sound of the band. ORGANIC just does not rest at any given second during the 40 minutes of this album. The vocals seep in between the maddening riffs, the drumming is just perfect, no BPM gimmicks or other nonsense. In fact, the rhythm section is like a war tank just crushing the rebels without remorse. Well, I for one thoroughly enjoy the old Swedish sound and I’m enjoying this slab by ORGANIC who seem to have added in all the right ingredients in the right proportions throughout the album. Just like all the songs, the band ensures to keep the album at the right length of 40 minutes. Recommended! For more information, please visit www.facebook.com/organicdeathmetal, www.facebook.com/testimonyrecords