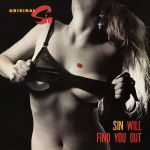 A few months after the mainly controversial re-release of the only EXORCIST album, High Roller Records again teamed up with David DeFeis of VIRGIN STEELE and re-released another brainchild of Mr. DeFeis. This time it is ORIGINAL SIN, who released one album in 1986. “Sin Will Find You Out” was supposed to be the first album of an all-girl band from New York. The album delivered eight pretty fast-paced songs with a hint on Thrash and Speed Metal, garnished with some playful elements and the powerful voice of Danielle Draconis. That was the truth for a long time until the open secret was unveiled: ORIGINAL SIN was the same band as EXORCIST, except for the pseudonyms and the singer. And the latter of the changes was family business, since David DeFeis’ sister Danae took over vocal duties for ORIGINAL SIN. Looking back now, “Sin Will Find You Out” was not one of those must-have albums of 1986, it was not even a very good one, but a solid album that was neither too expensive nor hard to find on original vinyl, in contrary to the EXORCIST album. Songs like ‘To The Devil A Daughter’, ‘Bitches From Hell’ or ‘Enchantress Of Death’ are still nice tunes for someone of my generation of old geezers but I doubt that they will find a lot of new fans nowadays. Yet a re-release of the original album on vinyl is a nice idea of High Roller and long overdue as well. But David DeFeis would not be David DeFeis if he would leave it at that. No, the CD version, the first ever, by the way, became a two CD set, with the whole album in three different re-mixed versions. And as a special “gimmick”, he gave the album an intro and an outro that are as redundant as a bicycle for a fish. The first two versions, called Daughter "Eve" (remastered by Patrick Engel) and Daughter "Damaris" (remixed by David DeFeis), are nearly identical, with the latter being a little more powerful. If you know the new version of EXORCIST’s “Nightmare Theatre”, this might sound as familiar to you as most of my words on the second disc. It features the third version, Daughter "The Siren" (Re-Mix Version). And once again the real magic of David DeFeis shows here. For this re-mix, he found hidden recordings and tracks that weren’t hearable on the original recordings. It’s pure magic! No, seriously, those added effects and instrumental tracks make the album sound somehow ridiculous and unauthentic. And the three exclusive bonus tracks are of course as 1986 as a smartphone. ‘Viking’ sounds like a song recycled from the dustbin of VIRGIN STEELE. ‘Burnin’ Whiskey’ is a pretty cool Blues soaked song with a fine Hammond organ in DEEP PURPLE style, maybe the best stuff on the album even though it absolutely doesn’t fit. Yet, the absolute highlight is the final bonus track: an alternate mix of ‘The Curse’, only the fourth version of the song. Okay, let’s turn off the irony now and state that this double CD release of “Sin Will Find You Out” is absolutely redundant. A CD with the original album and maybe one or two of the bonus tracks would have done. Check out www.hrrecords.de for more info.