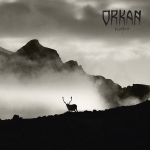 It would be a waste having more than one guitar and one just tagging along the other, playing the same chords or notes. That much is clear after lending your ears to "Element". To make it sound a bit dramatic, the music on this album is very much so. The guitars are painted with easily discernible colours, meaning there’s not much buzz around them, quite the opposite in fact: they’re crystal clear. Who but the listener is to judge how this sounds in Black Metal? As intricate as the guitars are it would be a waste to have them buried under layers of buzz, though. It’s often stated but here repeated listens give way to what can be easily missed at the first glance. Truly. It must be also stated that the songs aren’t structured per so called standard, which means no subconsciously familiar patterns. Not that they are the norm in Black Metal, but the genre isn’t immune to them. To these untrained ears the drums sound killer and complement the riffs well. Expect blast beats in double bass attack but not the whole way through. The bass guitar rumbles somewhere beneath and some effort must be made to make it out from all the guitar wizardry. The vocals feel like a perfect fit – with guitars being at the forefront their wailing is somewhat less tangible but it gives the music an air of mysticism. For the last song they shift to cleans, thus only cementing that song’s status as being the most "far out" on the album. It’s catchy, though. ORKAN’s creation thus conjures a heavy atmosphere which is mostly dreary (in the best possible meaning of the word) but in doing so strokes just the right strings. More here: www.facebook.com/orkanmetal, www.darkessencerecords.no.