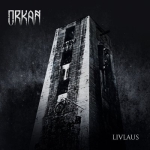 Norwegian Black Metal horde ORKAN is back with their second full length after a three year period of silence and it seems that the band opened itself to a more atmospheric and darker soundscape during that time. While the debut “Crimson Canvas” was more Thrash oriented and more energetic, “Livlaus” definitely evokes a lot more eeriness and despair within the listener. The album, with its lyrics completely in Norwegian this time, starts with the 9:27min track ‘Fanden Pa Veggen’ which immediately conjures some kind of an URFAUSTian atmosphere followed by a heavy Black Metal groove which leads into an AURA NOIR influenced verse riff. The song is also supported by some effects here and there which adds some more darkness to it. The second track ‘Brende Bruer, Svart Metall’ is probably the only song on the record that is more similar to the material that was featured on the first record. It reminds a bit of newer VOIVOD material mixed with Black Metal trademarks. Next we have the ‘Livlaus’ trilogy: Part 1 ‘Evig’ starts with an eerie melodic intro followed by blasts, shrieks and riffs which are cold as ice. The second part entitled ‘Dodens Dal’ pursues what the other tracks provided so far even though a bit more direct and less atmospheric. The third and final part ‘Tusen Sjeler’ adds some punkish vibes to the whole record with its beginning but soon merges into these eerie soundscapes produced by blasts and scrubbing guitars. ‘Uforgjengeleg’ and ‘Skodde’ finish the album off with nice songwriting but nothing that hasn’t been heard before. All in all this is a really well written (and produced) Black Metal record, but to me it lacks this certain amount of madness and unpredictability. But please go ahead and see it for yourself by clicking here www.facebook.com/orkanmetal or here www.darkessencerecords.no.