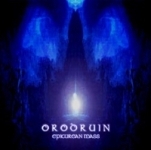 ORODRUIN is the brainchild of John Gallo, also known to run a fairly conceived website dedicated to the Doom Metal genre (www.born-too-late.com). Formed in 1998, ORODRUIN is now a stable four piece after some line up adjustments. Not surprisingly, “Epicurean Mass” comes out as a fine slab of Doom Metal, played by the book with not too much experimentations. After a gloomy intro played on Hammond organ, the album really kicks off with ‘Peasants Lament’ which is by the way the finest track on the album, very reminiscent of what CATHEDRAL did on “Forest Of Equilibrium”: ultra slow pacing, distorted low vocals on some occasions, downtuned guitars growling agony and sadness, you know what I mean. After that, the album flows more or less towards the same direction, which is cool but nothing more I am afraid. I mean, the main quality of this album is also its main flaw: the guys forming ORODRUIN are obviously fans of the musical genre they play, the proof being they have crammed their album with many references to the greatest bands of the Doom universe (BLACK SABBATH, SAINT VITUS and the aforementioned CATHEDRAL),yet on the other hand, I am afraid “Epicurean Mass” lacks elements of freshness and fails to let out a feeling of enthusiasm, a shame knowing the dedication of the musicians. Also, the production doesn’t help, the sound lacks definition, the guitars being the main victims of this. What I really don’t understand is the last (hidden) track on this disc: it is nothing more than a total loss of time. If you listen to it, beware: you could be led to believe you have a problem with your CD player. I can assure you it is not the case. Imagine screeches and scratches followed by an awful pseudo folkloric tune sung by a drunkard, and you will get a precise idea of this track is. Be forewarned. Maybe this review could appear a little harsh to some of you. It is only because this CD caught all my attention and interest and I judge it strong enough to be recommended, so I tend to be a little bit intolerant regarding some details. I am sure ORODRUIN display here only a tiny fraction of their talent, and that they will unleash a true masterpiece next time. Be sure to give a fair chance to this album which is a mandatory purchase for the regular Doom fans (like me!) anyway.