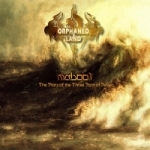 It has been quite some time since this original act from Israel has released their last recording – seven years, to be exact. ORPHANED LAND have certainly been among the first bands to incorporate local Middle Eastern musical influences and instruments as it can be heard already on their 1994 debut album "Sahara". Now the band returns with an epic concept album about the three monotheistic religions. According to the info the band decided to become active again due to the vast and loyal fanbase in the surrounding Arabic countries which is understandable upon hearing the featured material. ORPHANED LAND have never been the most brutal or darkest band but rather known for their unique blend of Oriental Metal. The influences incorporate Doom Metal, Black Metal, Heavy Metal as well as some progressive elements (especially the leads and some polyrhythmic structures) and lots of moody and evocative guitar picking. Also lead singer Kobi shifts from growls to clean vocals and back again. In addition to the six band members there is an abundance of guest musicians (more than 30!), different percussions, middle eastern instruments as for example oud, saz, buzuki (besides clean guitars, cello, violins and piano), choirs and vocals in English, Hebrew, Arabic, Yemenite, and Latin. All the material, no matter how diverse, fits in very well and has been conciously arranged. The flawless production is also convincing and gives justice to all compositions. I think that this album will be the breakthrough for ORPHANED LAND on a wider scale as "Mabool" (which means "The Flood") will certainly also appeal to people into different styles of Metal apart from Death / Doom and the likes. If you are already familiar with the bands previous recordings I would say: "Go for it!" as ORPHANED LAND have matured tremendoulsy during their absence. In case you have become curious: Check out this diverse recording but don’t expect something like MELECHESH. The first edition will come out with a bonus CD featuring five accoustic tracks from a live performance in Istanbul, by the way. Different for sure. Website: www.orphaned-land.com.