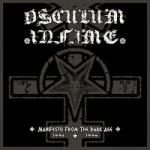 I thought this French black horde was long dead and buried… well, things have not changed, it is only that this compilation of their early recordings is seeing again the light (or darkness as you prefer)… old school Black Metal with at times heavy use of keyboards… not exactly my definition for what Black Metal has to be… but to be honest, they came out better than I expected. Although the band started in 1991, and started releasing material since 1993 I really never cared to hear them in detail… until now. At that time Black Metal was taking a new life… or un-life… and although most bands were just trying to copy Norwegians, there were a few of them which showed a different path. This French act was one of those. They use the keyboards in a very simple, almost amateurish way, but they came out victorious as they actually add something to the atmosphere of the music, which is a mostly mid-tempo to fast Black Metal, with buzzing guitars and the obvious high-pitched vocals. Ok, the vocals are more in the growly type, so they are not as annoying as that Dani whatever Filth boy. Guitars are not exactly heavy, they have that distinct distortion in a treble-based sound scale. The drum patterns are also very basic, with the fast and the mid-tempo parts sounding quite similar (and amateurish) but after a few listening I would say the drummer does a good damn job, and keeps it primitive when it is supposed to be like that. The sound quality is just above a good rehearsal quality. Most of the time, I keep asking to myself that the production of a recording can actually change many things in the perception of a band. If this material was recorded with a heavier guitar tone, and a more powerful production, it would actually enhance the band a lot, as the ideas, are there, no doubt. But then again, probably that aura that is in the music would be lost a bit. The music OSCULUM INFAME plays also has a lot of melody, but that of the wicked, obscure kind. I would say that they are actually embracing a sound akin to early SAMAEL although played in an upper tempo, with some reminiscent riffs to the early Greek Black Metal scene. Early DARKTHRONE will also be a reference, especially in the sound of the production. As a testimony of what early, primitive Black Metal was supposed to be played; this is a good place to go. While not exactly the kind of band I will be listening on a regular basis, this is good on its own and an obvious choice for fans of the style. www.myspace.com/osculuminfame, ordo-dp@hotmail.com