Portugal’s OSSARIVM is an interesting lesson in terror. They refer to themselves as Horrific Death Metal, which any of us who like horror movies, are obviously going to deconstruct to ad nauseum; to put it simply, the atmosphere and tone have a lot to do with what is truly horrific. Rather than an all out assault on your ear canals, OSSARIVM likes to create an ebb and flow of terror; the coming and going of full confrontation, the waves of nausea, the build up and the reveal. The latter of which also requires a lot of tact. We all know that anything truly evil waits and only somewhat patiently. The anxiety comes from the lulls, the times we anticipate for it to rear its ugly head. The suspense brings uneasiness, anxiety, fear and in time legend, hypotheses of terror as to what it might be like when the evil arrives… and we know it’s inevitable. True horror, my friends, will get you close enough to your fears that you may get close to it, you may even taste it but you are never going to truly confront or understand it. Horror looms. On that note, "Emanation" is a little less Cthulhu and a little more uh, Goro from Mortal Kombat. Don’t get me wrong, he is definitely terrifying, but when you listen to the vocals, you’ll pretty much see what I mean. On the opening track ‘Dissolving The Divinity’, they seem very odd, unsettling and not integrated in the sound. There are points when it sounds like barking dogs. They seem to layer better when all of the instrumental efforts are in full force and the speed picks up considerably. They get drowned out slightly, softening that edge that makes it just a little too clear for me to really buy into it. It’s the kind of obscuring that makes PORTAL so utterly nightmarish, for example; the vocal efforts blend and add texture to the equally ambiguous instrumental ones. ‘Empowerment Through Blood’ is a good example of this. The song opens at full force and we get that "washing machine" effect at times (which I like) and the gruffness of the vocals provide the rockiness at the top of the peak while the drums become almost inhuman and the bass continues its rumbled charge. Apart from the more confrontational parts of these songs, there is the bands other sound and it’s quite different: ambient nightmarish sound scapes. Intermittent cymbals, chimes, whistles and distorted echoes dust the starkness that is the second track ‘Ceremonial Horns And Thunder’. It’s ominous, atmospheric and overtly unsettling, which fulfills the other half of how we understand this kind of Horrific music. I don’t know about you, but I find this somewhat fringe genre of Horrific Metal to be massively exciting, even if I don’t always like every little piece of it. I get the direction and the heart of it is to truly explore the essence of horror; it’s certainly an uncomfortable place for any artist to go and it’s not like you can always rely on a bunch of boob shots to smooth it over for you. Get scared, dammit. http://preposterouscreations.com 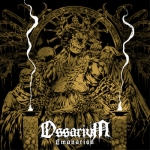 I will keep this short, as this album was already reviewed in Voices From The Darkside as a release on the Preposterous Creations label. Apparently it was released in conjunction with the Portuguese label Caverna Abismal back in 2012 and since I got it for a review from them, it seems like this one particular album isn’t flying off the racks. So here we have 3 looong tracks with looong intros, musically there isn’t much going on. Slow, choking riffs are dragged out and thrown into murky waters of horrific Death / Doom. If you like ENCOFFINATION, DISEMBOWELMENT, GRAVE MIASMA then you might be interested to check out OSSARVM as well, but quality-wise they aren’t up to match to all aforementioned bands, the songs sometime seem over-simplistic and I don’t like the way the vocals are mixed, I’m not even sure if this album was properly mastered, the key word to describe their sound is "muddy". It’s a one man project and the drums sound too mechanical as well, I wasn’t impressed at all. https://cavernaabismal.bandcamp.com