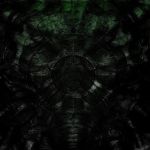 Can anyone remember when it started? Can it be pinned down to a designated year, album or band? I am not quite sure, but at some moments it feels like there is a vast number of former Black Metal bands now playing Death Metal. OTARGOS from Greece are a typical representative for this sub-genre. Founded in 2001 as a genuine Black Metal outfit (the title of the "Codex 666 – Infernal Legions Strike" EP from 2004 speaks for itself) the band changed their style and with album number six they ended up as an BELPHEGOR / BEHEMOTH clone. Or imitator. Or copycat. Of course I do not demand every band to invent or develop a new genre. But after a dozen listening sessions there was simply not one song that lingered my memory. Just imagine a mix between blasting BELEPHEGOR (damn it, the drummer is really fast) and mid-tempo stomping BEHEMOTH. If you like this style and just can not get enough, go for it! The sound is well done, and every instrument is played properly. For my taste "Xeno Kaos" is simply missing the scent of individuality or originality. More info at: www.otargos-terror.com, www.facebook.com/pages/otargos/75616314687, www.kaotoxin.com