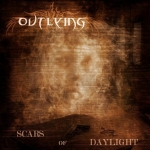 Anyone in need of an IN FLAMES clone? If not, better stop reading. "Scars Of Daylight" is the debut by OUTLYING from Canada, originally released 2011 and GS Productions are now in charge of the European version. Like I wrote above, the band is heavily influenced by the recent IN FLAMES albums, which means no savage Death Metal combined with melodic guitar leads but more Rock or Alternative Metal orientated structures with clean vocals from time to time. Sometimes it sounds more like PEARL JAM or ALICE IN CHAINS than a genuine Metal act. Since the musical development of bands like IN FLAMES and DARK TRANQUILLITY caused lots of discussions and big confusions I will restrain this topic to the short sentence "Like it or not!". Personally I stopped spending money on IN FLAMES albums some ten years ago. But if you like the recent albums of the forefathers of melodic Death Metal OUTLYING is definitely a band worth taking a closer look. www.facebook.com/outlyingband, www.gsp-music.com