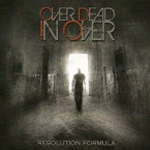 OVER DEAD IN OVER
Resolution Formula
(self-financed)
53:54min

OVER DEAD IN OVER, is an Italian Metal act that was founded in 2004, and their music could be described as some sort of hybrid of Thrash Metal and Death Metal, coated with a heavy use of modern Metalcore elements, which brings an unfortunate sour taste into my mouth. It’s no denying these Italian lads are well rehearsed – and they do play well the style they do but unfortunately due to OVER DEAD IN OVER’s modern – let me say, too ‘corish’ approach to their stuff, this album pretty much turns me off in the end of the day. I mean, all this down-tuned, ‘chunky-chunky’ shit that they have gotten heavily involved within the songs, simply doesn’t work for me at all. Such names as HEAVEN SHALL BURN, ALL THAT REMAINS, KILLSWITCH ENGAGE and AS I LAY DYING, they have all said that their stuff is strongly rooted in Thrash and Death Metal – and there’s nothing wrong with that either. The same thing can be applied to OVER DEAD IN OVER. They have obviously gotten some good portions of both Thrash and Death Metal mixed into the songs, but now this ‘corish’ element dominates everything way too much on the record, resulting me in using this ‘open window and frisbee’ combination, just to get rid off this as soon as possible. Well, job quickly done. For interested parties more about these Italian modern Metallers, however, can be found at: www.facebook.com/pages/over-dead-in-over/218077859255