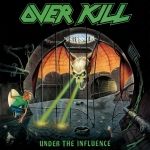 When people are talking about the “Big Four” of Thrash Metal, no one seems to take OVERKILL into concern. And yet they released five great to excellent albums in the heydays of Thrash from 1985 to 1991, that are in my opinion way better than most of the albums three of the “Big Four” did. But the third OVERKILL full length “Under The Influence” from 1988 always seems to be a kind of step child of this period of the New Jersey Thrash masters, as the other albums are more often the object of praise. Nevertheless the first album after the departure of founding member Rat Skates is an album with lots of great songs that really passed the test of time. The punky ‘Hello From The Gutter’ still finds its way into the live set and most “Greatest Hits” compilations. Unconventional Thrashers like the opener ‘Shred’, ‘Head First’ or ‘Mad Gone World’ never get out of style, just like the very variable ‘Drunken Wisdom’. And the rather catchy tunes ‘Never Say Never’ and ‘End Of The Line’ turned out to be better and better over the years. In the end, the eponymous ‘Overkill III (Under The Influence)’ continues the saga OVERKILL created in their early years very worthy. Despite the high quality, this album misses the real uber-songs and Doom monsters that established the reputation OVERKILL has today. But this definitely is not an excuse to miss out this fine album. Thanks to Rock Candy Records, “Under The Influence” is available as a fully and carefully remastered audio disc that also has a new, 16 page full colour booklet. It includes a huge essay about the times and circumstances of the recording of the album plus an enhanced artwork with unpublished photos from that era era. So it means to be the finest version of the album you can buy on CD. Fore more info, visit and like www.facebook.com/overkillwreckingcrew or www.facebook.com/rockcandyrecords