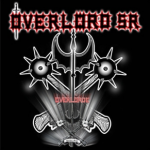 OVERLORD SR was originally known as OVERLORDE, then as OVERLORDE SR, and it looks like some more drama has been generated again – by one of two billion bands named OVERLORD or OVERLORDE – as this compilation is labeled as OVERLORD SR. Well, this OVERLORD (SR) comes from North Carolina, and they might be known to die hard maniax of US Metal, as they did two brilliant demos in 1985 and 1987, and they appeared on the legendary "Metal Massacre" compilation (they had ‘Keeper Of The Flame’ on "Metal Massacre VIII" from 1987, to be exact). In 2012 the band released a cool compilation CD titled "Medieval Metal Too" (as OVERLORDE SR!), and now Heavy Forces Records releases a similar one, titled "Medieval Metal Days" as a limited edition vinyl LP – and you can choose between the black vinyl edition (limited to 350 copies), or the version on clear vinyl (limited to 150 copies), which will also include a free patch. While the CD had 8 tracks, "Medieval Metal Days" includes 12 tracks: the mentioned 2 demos, and previously unreleased bonus tracks recorded during rehearsals. It’s not a secret or anything new that Heavy Forces releases have absolutely top quality, plus the truth is OVERLORD SR plays some high grade US Metal, so the LP is worth its price. If you haven’t heard this band or about this band before, but you like ’80s cult Metal heroes such as JAG PANZER, TYRANT, HEATHEN’S RAGE and so on, then you can actually order this LP without listening to it first. You won’t regret it! More information at: www.overlordsr.com, www.facebook.com/overlordsr, www.heavy-forces-records.de