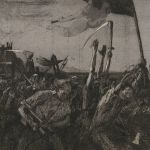 In 2019, the Canadian PANZERFAUST started something that took many exposed by surprise. “The Suns Of Perdition – Chapter I: War, Horrid War” was the first chapter of their pronounced tetralogy. Just after one year, now they are back with the second part in this saga. And it seems they continue exactly where they left off a year ago. As the second chapter can be described as the melting pot of more diverse sounds and ample reflection over what happened earlier. Consequently, there is now 44 minutes devoted to five songs in Chapter II, whereas Chapter I has a short playing time of only 31 minutes. Before the recorded tracks turn into riffs and blasts flowing from the loudspeakers, the preliminary greetings delivered by the album cover, which features a realistic lithography of the German graphic artist Käthe Kollwitz from her series ‘Peasant Wars’, dating back to 1899. It was absolutely worthy to get acquainted with the artist’s work, which is full of dark motifs, and surely can decorate more than one Black Metal album. The story starts with an ominous intro and quickly turns into the controlled chaos. Nevertheless, this opener, ‘The Promethean Fire’, is over ten minutes long and completely in mid-tempo. In the same way, ‘The Faustian Pact’ starts off quite leisurely, and developed with interesting drum patterns in the middle part, to an extent almost close to the opener. However, on ‘Areopagitica’, the shortest in length, tempos got higher and movements became more vicious. And, as the title indicate, it reflects the essence of John Milton’s protest against censorship. ‘The Snare Of The Fowler’, breached with a spoken intro about the loathsome world state, then erupts by dark and disturbing riffs, wild and brutal passages and demonic singing. Astonishingly, in terms of percussion, Alexander Kartashov, is just as creative as Darkside (MGLA) and puts his stamp on the material. The final track ‘Pascal’s Wager’ starts with a long, atmospheric introduction including a historical sample by Richard Dawkins (author of God Delusion), which later sophisticatedly transitioned with a MGLA styled breakdown, then closed with an outro that almost felt like reflection with sorrow. Even though PANZERFAUST has different notion of crafting, but no doubt, the masked Polish Black Metallers now influencing the sounds and skills of too many modern era acts. So, in retrospect, as with the first chapter, modern Black Metal is offered here, which contains parallels to the modern sounds from Iceland, France and Poland. And, similar to the trend, in this Chapter II, it’s noticeable that, with progression all songs have become longer in average, but musically everything remains the same. Atmospheric, melodic, technically refined, but always transforming with a lot of variation which heavily aided by the drum work based on cymbals and rolls that is high in the mix. Undeniably creative formulae. But, the highly polished and precise production that applied to express this, may feel fascinating at first, but eventually turns generic and not memorable. The substantial number of followers of this particular form of Black Metal would surely rejoice Chapter II, however, would not allure minimalist others. Explore more about the band and label here: www.facebook.com/panzerfaust.bm.official, www.eisenton.de.