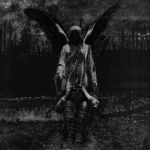 There has been a lot of talks about the Canadian horde PANZERFAUST and their fourth album “The Suns Of Perdition – Chapter I: War, Horrid War”, which was released this summer by Eisenwald Productions. The album is a tough ride as it is quite difficult to describe their material. For some it is clearly Black Metal while for me their stuff appears more as a darkened bastard between Death and Black Metal with a doze of Industrial tunes. The first one of their started tetralogy goes straight into their main topic: War! They spread darkness, death, war and total destruction and songs like ‘Stalingrad, Massengrab’ with its heavy riffing and intense drum work really is the Black Metal version of BOLT THROWER but where BOLT THROWER went through with their tank, PANZERFAUST uncompromising destroy all with a massive nuclear blast. ‘Crimes Against Humanity’, with its menacing atmosphere caused by the used samples, really makes this short album a destructive trip into human abysses. The guitar work is thick and excellent and combined with the brilliant drumming and the disturbing vocals, this album is a real tough chunk to deal with. The guys really know how to fill their heavy lyrical topics with the corresponding sounds. I often said, an album is a wrecking ball but this album really is one. It takes them only some seconds to start the war and only thirty minutes to only leave total destruction. Definitely a must to check and the hype surrounding this album is quite understandable. Rounded off by a really fine artwork, this one is another nice surprise for the current Metal year. For more information, please check: www.facebook.com/panzerfaust.bm.official, www.eisenton.de