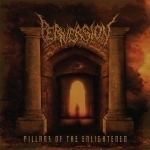 What I really enjoy about the world wide underground scene is that there is always the possibility to discover killer outfits from places which don’t come into your mind first when thinking about extreme music. In our case here I stumbled on this release by chance. The debut album "Pillars Of The Enlightened" by PERVERSION, which has its headquarters in the United Arab Emirates, is what I call an awesome release and a big surprise at the same time. The band was formed in 2006 in Dubai and self-released an EP ("The Origins Of Horror") in 2008. The current nine track (incl. one Intro) long player was originally released by the band itself but luckily Canadian based Blast Head Records grabbed the opportunity to unleash this gem again in order make it public to a world wide audience. If you ask me that was a very good descision because the material offered on "Pillars Of The Enlightened" totally shredds. The trio absolutely takes no prisoners and delivers a more than convincing brand of brutal ‘n’ heavy Death Metal played on a solid technical level. The squad easily merges old school Metal of Death (preferable from Sweden), technical brutal old school Death (immediately SUFFOCATION and the Florida scene come into my mind) and a few elements from acts being into modern brutality to an high explosive mix. Once ingnited you have no chance to escape anymore – you get totally blasted. An outburst of pure energy. The overall sound is pretty much straight forward and right into your face with skilled refinements. It’s an album being full of merciless, crushing riffs which leaves every headbanger with splitted skull caused by the sheer intensity this horde unleashes. This brutal riffing massacre is spiced with excellent, sharp guitar leads seeming to be heavily influenced by Scandinavian fellows from the early 90s. The drumming is tight and dynamic and pushes the songs always foward so there is almost no time to breathe. The powerful production, which was mixed and mastered in TME Studios in Ohio, is just the icing of the cake. I just can highly recommend PERVERSION’s debut album to everyone being seriously into Death Metal. So in case you would like to add another killer album to your collection then don’t hesitate to get in touch with the band at www.facebook.com/perversion.band or their label (www.blastheadrecords.com). There’s no excuse to miss this one!