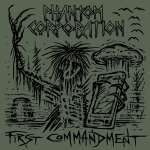 PHANTOM CORPORATION is a new project consisting of some well-known guys within the German Metal scene. DEW-SCENTED shouter Leif joined forces with his old buddy and drum-machine Marc from WEAK ASIDE (former DEW-SCENTED), Philipp (ERODED) and an old friend of them called Arne, known to some from his band BK49. Those four crazy guys hooked up to vomit out some really dirty Crust stuff in form of a six song EP called “First Commandment”. The opener ‘Liberty In Death’ is a real punch in the face. The uptempo track is driven by fast and brutal guitars, the intense vocals of Leif, deeper than known from his work in DEW-SCENTED and the brutal and fast drums of Marc. Crossing the borders of old school Death Metal, Thrash, Punk and Hardcore this brutal bastard is a real wrecking ball and rounded off by really cool and professional songwriting. Even though PHANTOM CORPORATION seems to be a fun project, the members have put a lot of love and ideas into their music. Songs like ‘Shock Wave’, ‘Pushed Too Far’ or the cool and intense ‘Capitulation’, which is my favorite track of this EP really are bursting from brutality and anger. Important to mention is the wide range of influences the members have put it into their sound and the result is brutal as hell and serves everyone from Death Metal, Thrash Metal over Grindcore to Hardcore. This is really Crust how it should sound like. Brutal, honest and with heart blood. The EP comes up with a clear and superb production which got mastered by Dan Swanö and also has as really cool cover artwork designed by VOIVOD drummer Away. And the best thing is, it can be purchased for ridiculous 5 euros plus postage via: https://phantomcorporation.bandcamp.com. More info about the band can be checked here: www.facebook.com/pc2016official. Hopefully there will be some more stuff in future.