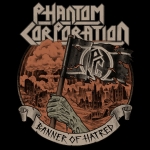 “Banner Of Hatred / Poison Death” is the long delayed, vinyl only, 12″ split release between German Crust lovers PHANTOM CORPORATION and Swedish Death Metal newcomers HARROWED. Both bands may not ring a bell at first, but if you have a closer look at the PHANTOM CORPORATION line-up, you will quickly be proven wrong: Leif Jensen (ex – DEW-SCENTED) on vocals, Arne Berents (ex – WEAK ASIDE) on guitars, Marc-Andrée Dieken (ex – WEAK ASIDE, ex – OBSCENITY, ex – DEW-SCENTED) on drums, Philipp Schulte (ex – ERODED, Germany) on guitar and Bastian Brühl (ex – MINDCRIME) on bass have all been active in the German underground for several years. HARROWED’s drummer / vocalist Adam Lindmark on the other hand might already be familiar to some of you from MORBUS CHRON and more recently DEAD LORD, while guitarist / bass player Tobias Alpadie, among other projects, used to help out brutal Death Metallers INSISION during their live shows. If I managed to get your attention now, we can go straight to the music on offer here. PHANTOM CORPORATION kick off the split with ‘Insurgents’, a 1:14 minutes short, straight ahead outburst of finest Crust / Hardcore aggression with an insane SLAYER-esque solo thrown in towards the end. ‘The Abyss’ doesn’t differ too much from the opener, it’s fast all the way through, maybe just a little bit less extreme (if you dare to say something like that in relation to the band anyways). Song number three, ‘Alongside Hell’, is passing the two minutes mark with just a few seconds for the first time and to me definitely PHANTOM CORPORATION’s standout track on this release. Just listen to the great leading guitar work, which sets in in the middle of it and musically definitely takes them to another level. ‘Take Their Lives’, a cover of the rather unnoticed KREATOR track from their 1986 “Flag Of Hate” EP, received a fresh update and musically stays pretty close to the original, just better produced and with a more intense vocal delivery. I always considered the song rather dispensable, but the PHANTOM CORPORATION take on it obviously proves me wrong. Good stuff! Sweden’s HARROWED are musically way more rooted in Death Metal of the very early days, when bands like NIHILIST, DEATH STRIKE, REPULSION or MANTAS were just creating quite a fuzz in the underground. HARROWED’s first track ‘Poison Death’ quickly comes up with the wellknown D-Beat and the beloved good old Boss HM-2 guitar tone, which sets the tone for the rest of their part of the split. The vocals are not in your average deep grunting style, but fierce sounding and raw, with obvious influences from raw old Punk as well. HARROWED’s three featured songs are all between six and seven minutes long (‘Poison Death’ and ‘Reap The Storm’ originally appeared on their one and only “MMXXI” demo from 2021), spiced with several breaks (yet not technical sounding), slow and fast parts, a pretty dark atmosphere and an overall very good feeling for what made this music so enjoyable before all those digital productions and the urge for perfection took over. In the last track, ‘Wendigo’, I even notice some traces of MASTER’s ‘Re-Entry And Destruction’ when it comes to the phrasing of the vocals. I am still not sure if I really like the length of the songs and probably would enjoy them a lot more, when they would be stripped down a bit more, but overall this is a very promising start from a band we certainly will hear more of in the near future. So, to sum it up, this is a highly recommended release of two very promising bands, with cool cover artwork for both sides and definitely worth checking out. I just hope we will see a CD release of it in the not too distant future as well sometime. For more band information please visit www.facebook.com/pc2016official or www.facebook.com/harroweddeathmetal. For ordering information check out www.facebook.com/supremechaos.de