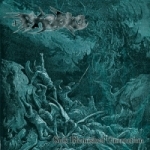 If you thought that HORRID was the only cool band from Italy playing the good ol’ Swedish Death Metal, you better think again, cause PHOBIC have delivered a really fine album of similar qualities. "Sick Blemished Uncreation" features ten brutal songs in the classic DISMEMBER / CARNAGE tradition plus a rather superfluous additional tekkno / electronic / whatsoever piece by the name of ‘S-L-999’, which hopefully won’t be a taster of things to come in the future… Among the brutal material you will also find a tune entitled ‘The Right Ones’, which originally was written and recorded by… ta-taaaa: our good buddies in HORRID (the song was originally featured on an older promo tape). So, that alone should already be proof enough of the very good taste of these four lads here, ha! It really seems to me that Italy is on the rise slowly but surely when it comes to quality Metal nowaydays. And after we all survived the first wave of Melodic / Symphonic Metal, brutality seems to take over with excellent bands like HORRID, NECROFLESH and PHOBIC! Luv that shit!