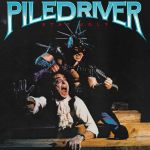 Canadian thrashing force PILEDRIVER shocked and overwhelmed the underground with their debut album “Metal Inquisition” in 1984. Provoking and raving numbers like ‘Sodomize The Dead’, ‘Human Sacrifice’, ‘Alien Rape’ and the classic title track still upheld the album’s name as one of the wildest Metal albums of the decade. After the great debut, PILEDRIVER was full on course to cement their legacy as an iconic underground artist of the 80s despite swirling with many rumors and mysteries. In 1986, they released their second album via Roadrunner entitled “Stay Ugly”. Although all of the material on “Stay Ugly” was composed and written by fellow VIRGIN STEELE heroes David DeFeis and Edward Pursino, this album doesn’t quite reach the bewildering sensations of “Metal Inquisition”. Nevertheless, there is enough material worth pondering deeply here, as surely the album was a hellbent progression of PILEDRIVER’s force that beholding a rampant thrashier sound with appalling humors. Then suddenly PILEDRIVER disappeared for two decades, and only resurfaced later under different monikers in 1988 – 1993 (as DOGS WITH JOBS), 2004 – 2019 (as THE EXALTED PILEDRIVER). No matter the turbulent history, their legend remained intact and grew deep. Few re-issues surfaced later to recall the spirit; however, all can rejoice again as High Roller Records this time offering a very special double CD (slipcase) reissue of “Stay Ugly” with three different remastered versions to knock the socks off anyone who overlooked or never was aware of this feverish record. The first disc contains the original mix, produced by David “The Lion” DeFeis (VIRGIN STEELE) and remastered by esteemed Patrick W. Engel. On the second disc, you will find tracks 1 – 8 (the brutally hideous version) and tracks 9 – 16 (the monstrously vile version); both remixed, remastered and reassembled by “The Lion” at Haunted House. No wonder, the version names hint the production to brace and right from the beginning, anyone would feel that this is pure classic Speed Thrash Metal, made for thrashing any modern-day recordings hard! ‘The Incubus’ opens the album in the usual speed manner, but also reveals one of those incomparable PILEDRIVER effects at the end, which is what makes the band so appealing and makes the extreme image hilarious. ‘Metal Death Racer’, ‘The Fire God’ and ‘Chaos’, will come as solid, hard Speed Metal, which roars incredibly fresh out of the speakers with all deadly serious and outlandish clichés ironically brushed aside. The spoken intro of ‘The Warning’ and leads into the more first banger ‘Lord Of Abominations’ (the record’s most memorable chorus) and ending with the classic ‘The Executioner’, with the PILEDRIVER style slow intro, break, fast riffs and unique ending. In conclusion: eight piling speed thrashing tracks with a tantalizing production boost, this re-issue justifies again why the wild Canadians covered Metal mags too numerous to mention. And also how “Stay Ugly” follows up their shocking first album, but equally weaponized to nail the sound barrier and ear drums of many followers. Get this special re-issue Metal manias, crank up the volume and get nostalgic, evoking the ugliness and lores of PILEDRIVER. To further explore the band and label, visit www.facebook.com/exaltedpiledriver, www.facebook.com/hrrecords