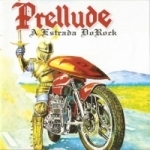 A traditional Heavy Metal band existing since 1995, re-releasing their debut album on a Chinese label… wow… well, I can only appreciate these efforts from Area Death to dig this obscure Heavy Metal bands which is a lot better than rehashing plastic Thrash Metal bands. PRELLUDE on this record sounds like a mixture of Hard Rock and NWOBHM with a darker tone, sung in Portuguese, which gives a weird sense (kind the one felt when listening to traditional bands singing in Japanese). The production of this first album originally released in 1998, is quite good, with maybe the guitar a bit left behind in the mix. I think I can hear a bit of different mixings from song to song, as if this was recorded over various sessions… ok, now on to the music. The first band that comes to mind is IRON MAIDEN, although there is a strong BLACK SABBATH influence on the guitar playing. At times I was also reminded of some early progressive Heavy Metal bands (very early FATES WARNING comes to mind) but with a more primordial touch to it. While this one will not exactly be missed in any Heavy Metal collection, it’s a welcome addition if you are looking for obscure exotic Heavy Metal bands, which in this case sounds like it was done back in the 80s not in the 90s. My favorite song here will be the last one ‘Little Girl’ (one of the few sung in English). As a bonus, this one includes their 2001 EP "Raising From The Dead", which is this time all in English, with a lot better production and a more present guitar sound, I would say the style remains the same, if maybe it just gets a bit more modern with some reminiscences to early QUEENSRYCHE. I think this also features a different vocalist. Interesting, there is no doubt about it. www.myspace.com/prellude, adp.areadeath.net