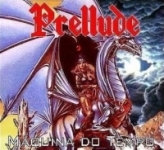 After almost 10 years since their debut album, this Brazilian band returns with their second full length. One thing that really takes my attention is that their previous work, the EP “Raising From The Dead” was all in English, they decided to again record in their native Portuguese language. Also their more modern sound was left a bit behind, and this actually takes again the more primordial sound of their debut, if maybe fixing the production details, as now the guitar is up-front and the sound is brighter. They have almost left out the Hardrock sound and while IRON MAIDEN, DIO and JUDAS PRIEST can be named as main references for the band, they now incorporate a faster tempo, thus avoid sounding like the flowery Metal bands (which are in fact Pop played at higher RPM). No, they keep it intense with songs like ‘Máquina Do Tempo’ that could easily pass as early Speed Metal. This time there are also a lot more guitar solos, whereas on their previous work they were scarce, and an overall better performance in all fronts. A song like ‘Fúria Calada’ sounds A LOT like early RUNNING WILD, which shows again a more versatile style of the band. The album is also well balanced between some more mid-tempo songs, and whereas there are no ballads here, ok, maybe ‘Futuro Cego’ comes close to one, with every new listening, this albums shines some powers that based on their previous works would be hard to foresee they will develop at this strength. Yes, nothing original, yes, nothing new, but in this case I can sense a lot of conviction, and also wisdom enough to stay away from turning into a Metalcore band, or a Power Metal band, they just keep their flag of pure Heavy Metal there (verging in Speed Metal), borrowing some elements from other styles to make it stronger. I was not expecting this, and was a more than welcome surprise. Now this one is a good addition to any respectable Metalhead’s collection. One of the truly lost jewels of Heavy / Speed Metal that needs to be listened to. Great album. www.myspace.com/prellude, adp.areadeath.net