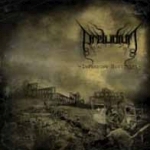 The 2nd release of Indian label Diabolical Conquest Records (DCR) is the 3rd album of Polish Death Metallers in PRELUDIUM. Haven’t heard any older release from this band before, never ever read something about them. By judging this release I wonder about myself and the Metal media as the quality of PRELUDIUM is really amazing and because of this I would consider them as insider tip and DCR did well with releasing their newest record. This seems to be DCR’s philosophy, not to offer and especially not to feed the current musicial trends and waves inside the scene and trying to go in another direction to search for bands outside the current fan-request. THE DEAD’s album (first release on DCR) was very different and contrary to the wish of the common Death / Doom Metal fan, PRELUDIUM are probably little bit more standard, nevertheless different to what you can expect when reading that we have to deal with a Polish Death Metal band. The most outstanding part of this recording is the sound and here especially the drum sound – which is real, natural and not triggered and falsified with computer-effects / -manipulations. Next to the great drum sound I’m really attracted by the dark atmosphere the guys put on plastic. "Impending Hostility" is one more proof of the outstanding Death Metal Poland has to offer. In this case it’s Death Metal with Black Metal elements and 9 songs of very good Death Metal in its purest form. Besides that, offering a logo done by Christophe Szpajdel isn’t the worst thing either, haha. Go for this release if you are interested in original sounding Death Metal performed in highest quality. Check out the band at www.myspace.com/preludiumband and the label at www.diabolicalconquest.com/label.htm. Ordering details can be asked at one of those addresses.