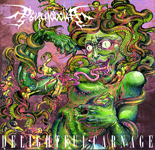 Brutal Death Metal, anybody? Then keep an eye on France. PSYCHOBOLIA, from the city of love (a.k.a. Paris), is a four-piece that’s not a bit influenced by the atmosphere of their hometown. Around for a decade now, "Delightful Carnage" marks their second full length album to date, following "Fisting You All" (what a title!) from 2008 with a different bassplayer and singer. Now Ginger is in charge of the vocals and it really stroke me that the bestial vocals on this album were done by a girl. I wouldn’t ever have guessed that… Maybe it’s just a coincidence, but when I listened to "Delightful Carnage", I more than once thought of those recordings SINISTER did when Rachel was in the band. Or is it the fact that the twelve songs are pretty short and to the point? Well, honestly said, PSYCHOBOLIA are a little more technical and somehow slightly mathematical than SINISTER even were and will be. Thus they sound more American than European. In fact, all those frisky breaks make it hard to catch them on first hearing, but that might not be problem, since some of the songs work out pretty well after a few run-throughs. My personal advices are: ‘Shallow Depths’, ‘Carnage’ and the final smasher ‘A Split Second’. Nevertheless, a few changes of speed and some straighter parts might have helped this album a lot. So I can only attest that PSYCHOBOLIA are… average. I heard worse yet, but I also heard better and more exciting records as well. All those, who dig brutal Metal of Death should give these guys and girl a chance: www.psychobolia.com, or like them at www.facebook.com/pages/psychobolia/170656922960301