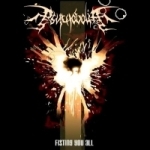 It’s not everyday such twisted humor, so idealic in every sense as this, should warm the depths of my black heart. The facts alone about this band’s debut album being titled “Fisting You All “, and that PSYCHOBOLIA is a Gore encrusted brutal Death Metal act fronted by a female, had me laughing out loud! I mean c’mon, how fucking ironic can you get? “Fisting You All”… And the vocal duties spit into the mic by a woman?! Fucking hysterical. What’s next from this quartet? A sophomore CD follow up by the title of “Blunt Force Bukkake”!?! Hahaha… Too funny – Anyhow – comedic value aside, PSYCHOBOLIA bring to the table a lot more than this, and most assuredly more than their fair share of ripping brutal Death Metal, along the lines of old SINISTER, MORBID ANGEL, IMMOLATION and a virtual host of other well known Death Metal favorites. Especially CANNIBAL CORPSE. To be wholly accurate, PSYCHOBOLIA’s most legitimate and immediate sound quality or clotted chunk of maggot ridden rotten flesh, take that as you will, would have to be SINISTER meets CANNIBAL CORPSE with the speed and dexterity of ANGEL CORPSE. Absolutely brutal and utterly savage Death Metal with enough technical oversight to please even the most skeptical out there of this relative newjack to the U/G Death Metal scene. Production is punchy, tight, and absolute in regards to the fast, intense and ultra-brutal Death Metal PSYCHOBOLIA will soon be known the world over for. Lastly – I have to say that of the latest cropping of bands to make it out of France in recent months (… years), PSYCHOBOLIA just impress the Hell out of me just like their fellow countrymen / counterparts BLOODY SIGN. The French scene is proving once more that brutality and anvil-strong Death Metal can be procured in the unlikeliest of places. P.S. For those who think Zdenka Prado of Cinnicinati, Ohio’s ESTUARY (currently signed to Ibex Moon) has a pair of lungs on her – to not only devastate and keep the pummeling pace of that band and effectively has no rival. Be warned… Caroline of PSYCHOBOLIA may leave you breathless! Contact: www.myspace.com/psychobolia or www.xtreemmusic.com