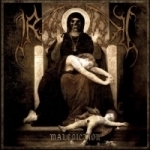 RAGNAROK from Sarpsborg, Norway, have been around since 1994 and released 7 full-length studio albums thus far, off which this 10-track opus titled, "Malediction", is their latest one – and first for their new home, Polish Agonia Records. Since the band’s 2010 album on Regain Records, "Collectors Of The King", previous guitarist Brygge has stepped away from the RAGNAROK troops, and his place has been taken by a guy named Bolverk. RAGNAROK have pretty much always concentrated on playing their Black Metal fast and furiously – and they really haven’t made an exception to this rule on the "Malediction" album either. Hyper-blasting Black Metal this is pretty much from start to finish, only having a few mid-paced and slower parts mixed in. In fact, in some weird way RAGNAROK could be compared to some professional driver in his racing car with their skills; they keep on track even if there’s so much speed involved within their music. RAGNAROK surely know how to be professionals for racing against all speed limits, only slowing down a bit when it becomes necessary for the advantage of their song structures, just to have a bit more musical variation for them. Unlike some of their Swedish comrades in such Black hordes as MARDUK or DARK FUNERAL that have also got lots of vicious speed, aggression and madly hyper-blasting parts involved with their Black Metal, for some strange reason RAGNAROK have more or less been kinda underrated Black Metal horde compared for example to those 2 aforementioned Swedish Satan and war worship leagues. In my opinion they are right on a par with either MARDUK or DARK FUNERAL – unless not even better, as "Malediction" speaks for some great volumes of sheer quality and enjoyable Black Metal. RAGNAROK have still failed to record a bad album; "Malediction" continues RAGNAROK’s top-notch tradition to get quality albums out from their infamous catacombs, from one album to another. Band contact: www.ragnarokhorde.com, label: www.agoniarecords.com