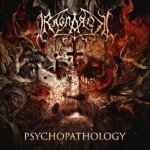 When labels are starting the merchandise engine to promote upcoming records, it often sounds as if, with this record we eventually will be redeemed. “Highly anticipated”, “long awaited”, “probably their the best” and so on. Mostly, I neither nervously wait for records nor adjectivate the shit out of my desires. I am a more balanced kind of a guy. Mostly I don’t “highly” or “utterly” await the future. Superlatives are for fun fairs. Mostly. This time I kind of deplore that letters can’t yell at you the way I want them too. At the 25th of March, Christianity’s saddest day this year, Agonia Records releases three different RAGNAROK records. The album “Psychopathology” and the collection “Chaos And Insanity Between 1994-2004” on vinyl. Plus they put those two records together on a CD called “Psychopathology 1994-2006: Collection Of The History”. With all the habitually things. Like a poster of the old ’94 line-up, unreleased and rare tracks and the first demo “Pagan Land”. Delicacies for fans. A treasure chest and piece of Metal history for beginners. Now coming to the highly anticipated 8th studio album, “Psychopathology”. Things have changed. The style is different, the sound is bigger, founding member Jontho is not drumming anymore. RAGNAROK once more transformed themselves, while proving the fact: you can play with a lot of different influences and still follow a path. You can change basic elements, doesn’t mean you have to sit on bar chairs with an orchestra in the back playing your riffs on a 12-string acoustic. RAGNAROK always combined different ways and ideas to achieve their core concept. Genuine, straight and malevolent Black Metal. They easily managed member changes by integrate the new through giving them the space needed, but on their soil. That’s how characters like Hoest, Thyme or HansFyrste did both making it unique and continue the work itself. Listen to songs like ‘My Hate Is His Spirit’ from the 95 album “Arising Realm” proceed with ‘Murder’ from 2004 “Blackdoor Miracle” and ‘Burning Earth’ from 2010 “Collectors Of The King” to finish with a fifth song ‘Infernal Majesty’ from the new record “Psychopathology”. You will realize over this odyssey how this band is a unique example for managing these circumstance, keep focusing on their path and still retain an unrivaled level of graveness. On “Psychopathology” the most surprising element is definitely the fact that founding member Jontho left his drums and switched to the microphone. What sounds like a little change happing in a lot of bands is something else with RAGNAROK. Jontho’s drumming is outstanding. For me he might be one of Black Metal’s greatest. RAGNAROK is Jontho’s drumming. Now after they have separated from HansFryste due to personal and family issues and in total peace as it seems, they changed the recipe once more but again with such perfect balance. Jontho singing plays with a lower pitch of voice. Switching through stretched resonating and short sang and moaned parts. Adding an oppressing atmosphere onto the mostly extreme fast drums. Which are now taken over by Malignant from DAUDEN. A young, magnificent and sublime replacement. The riffing is absolutely outstanding. Chaotic, melodic, insane, straight, Jazz like, disharmonious, accentuated, savage. It’s an event. I am not able to adjactivate my feelings the way this albums needs. Technically, if you ever listened pointedly to RAGNAROK and got riveted by them, I don’t have to say anything else then: this album sets benchmarks. Again. Good friday is something you should utterly await this year! www.ragnarokhorde.com, www.facebook.com/ragnarokofficial, www.agoniarecords.com