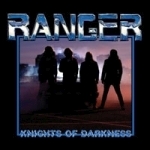 HYSTERIC SPEED FUCKIN’ METAL MAYHEM HAS ARRIVED!!! Oooh F**K yeaaahh…!!! It’s right here, exclusively served by one of my very favorite new bands of the whole millennium, Finnish Speed merchants and Thrash bangers RANGER. RANGER’s ‘only-vinyl’ release "Knights Of Darkness", contains 5 songs all in all, off which 2 songs are taken from the band’s previous "Combat Metal" demo, the remaining 3 tracks being all new ones. RANGER sound exactly like a band stuck in the heydays of the early / mid eighties Speed Metal / NWOBHM boom, when bands like AGENT STEEL, DESTRUCTOR, EXCITER – and last but not least, Ed’s favorite group IRON MAIDEN, were all enjoying an immense success (some more – some less) among true, batch-covered and denim vest wearing Heavy Metal lunatics and Speed Metal freaks around the world. RANGER’s frenzied, hotly blazing Speed Metal assaults are nothing but a grande big bow towards the ’80s period of truest Speed and Heavy Metal bands – and the way how they have collected all of their own shit together to make as much noise as possible out from themselves on "Knights Of Darkness", absolutely deserves beer-loads of sheer respect and admiration, no doubts. "Knights Of Darkness" works such an intense nostalgic trip back to the deepest heart of true Speed / Heavy Metal; so amazingly well that there surely willy be a bunch of you spectics out there wondering how on earth they actually managed to record this such a denim and sweat smelling, totally neck-wrecking EP! This is Speed Metal heaven Anno Bastardi 2013, without any compromises I mean!!! \m/ More about the present and future of Speed Metal can be found at: www.facebook.com/rangerheavymetal, label: www.ektrorecords.com