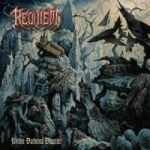 It’s been a good while since I’ve given the Swiss Death Metal Armageddon squad REQUIEM a spin. They haven’t been much on my mind since 07’s "Premier Killing League", which was a decent pounding Death Metal basher, without making that much noise. They’ve released two albums since, where I am listening to the newest offering as writing. "Within Darkened Disorder" displays cover artwork from the notorious and easy recognizable Dan Seagrave, and the band’s trademark pounding Death Metal, with a twist into new directions, or did they begin that journey with the last album? Heavily rooted in the middle of Europe the band has strings to both the thrashy Dutch Death Metal scene, the sludgy Swedish and more modern takes on their metier. Though I like it the best, when the keep it simple to the core. When they start to incorporate too much melody and vocal alternations, I’m off the train. Being heavy and crushing is what REQUIEM do best. A progressive track like ‘Omnivore’ bores the hell out me, as the band is acting like a fish out of water, with all the breaks, melodic leads, vocals that the vocalist isn’t able to handle, and a confused rhythm section. Melodic semi-progressive Death Metal are for some, but not all. When REQUIEM is pounding old school Death Metal with a heavy and drowsy feel, it works, as soon as they turn up the melodic highway and starts making music too technical and progressive, the flow and atmosphere is lost, and that’s quite a shame, as they do their initial style quite well, and haven’t found their place within what they are exploring, and the most of the this record is a quest into progression, more tracks like ‘Vicious Deception’ would have made my day. Give it a shot yourself at: www.requiem-net.com and www.facebook.com/pages/requiem/28204982085