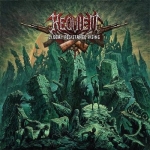 REQUIEM from Switzerland should at least be known to a bunch of you guys, as they are active for more than a decade now. With "Global Restistance Rising" they release their already sixth opus after a longer break of seven years, this time via F.D.A. Records, who nowadays are also a guarantee for high class releases. The opener ‘For The Blind To See’ took me some spins to realize the full quality range of this track. It is simply a monster, beaming the guys up in Europe’s major league of Death Metal bands. The fundament here is old school Death Metal from the US in the vein of MORBID ANGEL or maybe SUFFOCATION or Polish warriors VADER but with a memorable twin-guitar styled lead melody which definitely is influenced by the Swedish melodic Death / Black movement combined with the brutality and groove of the mentioned US – Death Metal bands. And by the way the track is one of the best I have heard for a long time. ‘Lockdown’ starts with blast-beats and guttural grunts before turning into another groovy monster with ever pounding double-bass and good hearable bass-lines. Again it seems that the groove of US-bands was paired with Scandinavian stuff and a good doze of Thrash Metal carefully incorporated. ‘Deevolution’ is the third track and the first one, where the groove is left behind a bit in favour of a more technical approach and some careful used DEATH / CYNIC influences appear before they let the groove speak again. ‘Vultures’ , ‘No Quarter Given’ and ‘Downward’ go back to the US and some CANNIBAL CORPSE influences appear but very carefully used and kept very raw and groovy again. What I like is the massive production which is clear and very powerful and the ever present bass-lines are really enjoyable. ‘Salvation In Vain’ is a killer track again reminding me of HYPOCRISY and their track ‘Osculum Obscenum’. Especially the vocals changing into a more thrashy direction really kill everything. ‘Greed Kills’ is brutal again before ‘Resistance Is Rising’ is very technical again and some very enjoyable DEATH influences show up again. ‘Fire In The Hole’ closes this killer album, which by the way gets rounded off by a killer artwork of master Dan Seagrave. Another highlight of this young Death Metal year. For more info check the following sources: www.facebook.com/requiemswitzerlandofficial, www.fda-records.com