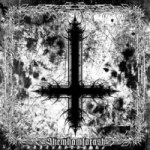 Using a bandname from an old BATHORY song and calling their 2nd output (if I’m correct…) "Shemhamforash" made me think that this might not be the most original release. Honestly spoken, neither the bandname, the title of the CD nor the music itself is original. But what starts as a pretty negative review is only half of the truth, because what these guys offer is very good raw Death Metal in its purest form, with hints from old SAMAEL, HELLHAMMER / CELTIC FROST (if we talk about their slower parts) and old IMPALED NAZARENE. Mostly played in high speed tempo you can’t really expect virtuous musicianship and melodies, in fact melodies are quite rare here, nevertheless you get a tight sounding and amazingly good produced Death Metal album with tasty songs as the opener ‘Six Six Six’, the catchy and CELTIC FROST-esque ‘The Goatwhore’ or the mighty ‘Messenger Of Darkness’. From time to time I feel that a little bit more variation in speed and brutality would suit them well, though this might be only my humble opinion (I mean, I request the same from a band like MARDUK all the time, so what?). Short and simple: a pretty good record, fans who love it raw and dirty, nevertheless asking for well-produced records should dare to listen to this release. Quite promising, still not essential! But which record is essential these days? Check out www.paganrecords.com.pl.